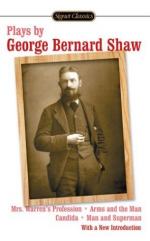 Get A Discussion of Freedom by Shaw from Amazon.com
View the Study Pack

This student essay consists of approximately 8 pages of analysis of A Discussion of Freedom by Shaw.

A Discussion of Freedom by Shaw

Summary: A radio talk on BBC by George Bernard Shaw and it has been taken from Modern Prose, edited by Michael Thorpe.Here,with his characteristic sneer, Shaw discusses the true meaning of freedom and its present-day implications. Shaw was indoctrinated into socialism quite early in his life due to his contact with Sidney and Beatrice Webb and William Morris, and his reading of Marx, who, he said, "made a man of me." He was also influenced by the writings of Henry George and he brought a courageous, clear mind to the study of social problems. Like his predecessor Samuel Butler, Shaw tore off veils and laid bare the illusions of complacently blind people.
FREEDOM

"My conscience is the genuine pulpit article, it annoys me to see people comfortable when they ought to be uncomfortable; and I insist on making them think in order to bring them to a conviction of sin." -----Shaw.

The above quoted lines show us the uncompromising character of the man who never thought idealistically about literature, that is to say, one who never romanticized it. He considered all literature to be journalistic and his purpose was to convert the nation to his opinions. He did this in two ways: by writing plays which made people laugh up to a certain point till they realized that they were laughing at themselves, and by chastising their self -complacency with his essays and lectures. It is difficult to say whether his rather opinionated and propagandist attitude contributed much to the enrichment of his plays, for he could...

A Discussion of Freedom by Shaw from BookRags. (c)2021 BookRags, Inc. All rights reserved.