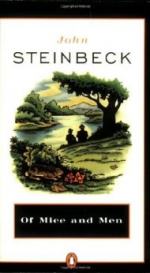 John Steinbeck
This student essay consists of approximately 2 pages of analysis of Of Mice and Men.

Of Mice and Men is about two men trying to get enough money to buy their dream. Their dream is getting a farm of their own and living off of what they produce. Lennie, one of the two main characters, is a little mentally challenged and he cannot remember things well. He is very big and strong, and can do work for two men. He loves to pet soft objects and this gets him into a lot of trouble. George, the other main character, takes care of Lennie and has a great burden because of him. At the farm where Lennie and George work, there is a small man that does not get along with Lennie. George notices friction between the two and plans to leave before anything bad happens. Before they can leave, a strange and unexpected thing happens. The ending is very sad and surprising.

The story is very well written and there are few flaws. Because Lennie is so simple minded the story and the writing is very simple and easy to follow. This style helps people get into the book and they can read it easily. Steinbeck writes about nature and this is a very important part of his writing technique.

This is a great novel written to show how people lived during the Great Depression. I believe that everyone should read this great piece of work.