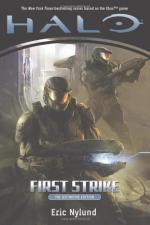 Get Halo: First Strike from Amazon.com
View the Study Pack

This student essay consists of approximately 3 pages of analysis of Halo.

In the previous ones the humans defended themselves in this one they take the fight to their enemies. The characters in this story are called SPARTANs. They have superhuman strength and reflexes so they call them SPARTANs after the Greek warriors. There are three remaining SPARTANs: John, Fred, and Kelly. They first defend their main generator at the start of the book, and they don't succeed in saving it. Then they went into space in a army carrier and were caught in a space fight. They ended up barely surviving against the two alien ships. They commandeered an alien ship and left their carrier. After clearing the enemy ship they find alien engineers. The engineers are neutral and help John and the other SPARTANs fix the ship. While they are on their way to Earth they encounter another planet of...