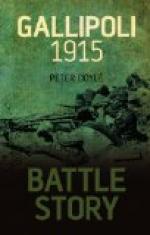 Get The Importance of the Gallipoli Campaign of World War I from Amazon.com
View the Study Pack

This student essay consists of approximately 2 pages of analysis of The Importance of the Gallipoli Campaign of World War I.

The Importance of the Gallipoli Campaign of World War I

Summary: The Allies's Gallipoli Campaign in World War I was important because it improved the morale of the British public, it allowed grain to more easily flow to Russia, and it kept Russia in the war, which was needed for the Allies to win.
During World War I, the Gallipoli Campaign was the Allies last resort in getting back into the war. In fact the top general in Britain Lord Kitchener stated that if we get hold of Constantinople, which is now called Istanbul, we wouldn't win the battle but the war itself.

Gallipoli is an area of land, which is owned by Turkey. This area was crucial for the Russians because from here Britain could send them supplies. Germany asked Turkey to join forces in the First World War. This agreement shut the vital route of supplies to Russia.

Reasons why it was so important the Gallipoli Campaign should succeed can be divided into short and long-term reasons.

The short term reasons are as follows;

Quick victories were needed in the war to raise the British public's morale and to show that that the First World War could be won.

There was also a food shortage in the west this meant that the Russian's grain was needed.

The Russian's also needed desperate help to move the Turkish troops away.

In addition Russia needed the Dardanelles open. 90% of Russia's grain and 50% of all her exports came from this way.

Russia also suffered at the battle of Tannenburg and was short of their rifles and ammunition. This meant if the Germans were to attack Russia it was feared that Russia would be defeated with disastrous effects.

The long term reasons are as follows;

By now everyone realized that the war couldn't be won in the trenches of France and Belgium an attack on Gallipoli was the answer.

There was also a threat that Russia might pull out of the war. This will be a big advantage for Germany, as they will only need to fight in the west. An attack on Germany round the back door through Turkey was now considered.

In conclusion it was considered that the Gallipoli campaign was very important to be successful for both short and long term reasons but maybe the most important reason was the threat and danger of Russia struggling in the east. This made it possible for the Germans to bring back their army to the west and set out upon the invasion of England. This thought feared the whole nation and set the importance for the Gallipoli Campaign to succeed.

More summaries and resources for teaching or studying Battle of Gallipoli.

The Importance of the Gallipoli Campaign of World War I from BookRags. (c)2022 BookRags, Inc. All rights reserved.