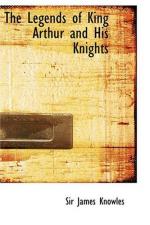 Get King Arthur from Amazon.com
View the Study Pack

This student essay consists of approximately 2 pages of analysis of King Arthur.

Summary: A short synopsis from King Arthur by Frank Thompson. A look into the life of a Sarmartian knight.
King Arthur

Sarmartian knights have been forced to fight for the Roman Empire for 15 years. This obligation was due to the fact that their forefathers had died in the hands of the Romans after a great battle many years earlier. At the beginning, they were 100 knights of the Round Table. They are leaded by Arthur, Artorius Castus and now the six remaining knights are about to be given freedom. But Bishop Germanus has a last mission for them. The Saxons, very brutal armies leaded by Cerdic, are invading from the north and will slaughter all in their way. The mission consists in rescuing a Roman priest and his family, especially his son Alecto, who live north of Hadrian's Wall. This mission seems nearly impossible to fulfil - defeat a bloodthirsty Saxon conqueror and his army, a dozen times the size of Arthur's own. But...

More summaries and resources for teaching or studying King Arthur.