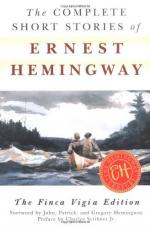 Get "Hills Like White Elephants" from Amazon.com
View the Study Pack

Ernest Hemingway
This student essay consists of approximately 4 pages of analysis of &quot;Hills Like White Elephants&quot;.

Summary: In Ernest Hemingway's short story "Hills Like White Elephants," the author addresses a subject thought to be taboo in the 1920s, abortion. During this period, people were consumed with having a good time and living a carefree lifestyle, as depicted in the great American classic The Great Gatsby.
"Hills like White Elephants"

In Ernest Hemingway's "Hills like White Elephants" the author addresses a subject that was thought to be taboo in the 1920's. The subject that the author addresses is that of abortion. During the roaring 20's people were consumed with having a good time and living a care free lifestyle. As it is evident in the great American classic "The Great Gatsby" which gives a depiction of the lifestyle that people led in the 1920's. During the decade that the story was written for abortion was not talked about nationally nor was there any education on it. Abortion was only talked about amongst friends and their inner circles. The couples of the time, especially the couple in our story, seemed to be more concerned with enjoying their care free lifestyle and not wanting anything to change that. In the 1920's the emotions...

More summaries and resources for teaching or studying Hills Like White Elephants.