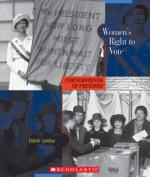 Get A Women's Right to Vote from Amazon.com
View the Study Pack

History of women's suffrage in the United States Essay | Essay

This student essay consists of approximately 4 pages of analysis of A Women's Right to Vote.

A Women's Right to Vote

Summary: The struggle for a womens right to vote in America
Women's Right to Vote

August 26, 1920 was perhaps one of the greatest victories of the century for women. Now when the polls open women and men stand next to each other and cast a vote that holds the same importance. Every person should remember the time and effort it took to get here as they approach the poll booth. There was a struggle to over come and that struggle was won. The landmark acceptance of the Nineteenth Amendment changed the way of life in American forever.

"We were sixteen women sitting in sixteen chairs, longing to stand. (Dubois 250)" This quote given by Mary Baker before the Passing of the

to stand next to each other in a line of equal measures. Before 1920 life for a female was assumed to be a life living in the house watching...

More summaries and resources for teaching or studying History of women's suffrage in the United States.

A Women's Right to Vote from BookRags. (c)2021 BookRags, Inc. All rights reserved.