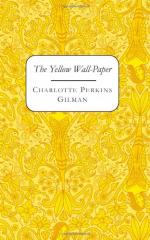 Get "The Yellow Wallpaper" from Amazon.com
View the Study Pack
View the Lesson Plans

Charlotte Perkins Gilman
This student essay consists of approximately 4 pages of analysis of "The Yellow Wallpaper".

Summary: An analysis of Charlotte Perkins Gilman's influential short story "The Yellow Wallpaper." Written in 1892 and derived from Gilman's personal experience, the story touches on the oppression that women and the mentally ill faced as a result of being shunned by society during the 1890s. In the story, an unnamed woman is confined by her doctor-husband to an attic nursery; the confinement and isolation imposed by her husband worsens her condition rather than treats it, and drives her mad.
"The Yellow Wallpaper"

Charlotte Perkins Gilman's "The Yellow Wallpaper" first appeared in 1892 and became a notary piece of literature for it' s historical and influential context. Gilman's "The Yellow Wallpaper" was a first hand account of the oppression faced toward females and the mentally ill,whom were both shunned in society in the late 1890's. It is the story of an unnamed woman confined by her doctor-husband to an attic nursery with barred windows and a bolted down bed. Forbidden to write, the narrator-protagonist becomes obsessed with the room's wallpaper, which she finds first hideous and then fascinating; on it she eventually deciphers an imprisoned woman whom she attempts to liberate by peeling the paper off the wall. The narrators' condition weakens at the end of the story, as she is driven mad by numerous influences who tried controlling her for what they believed to be assisting her...