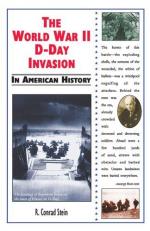 Get D-Day from Amazon.com
View the Study Pack

This student essay consists of approximately 2 pages of analysis of D-Day.

Summary: A short overview of the Allied invasion of Normandy on June 6, 1944, also known as D-Day.
At the beginning of World War 2, Germany invaded Poland, causing France, Great Britain and Canada to declare war on Germany. By the spring of 1940, the German army was ready to invade France, defended by not only the French military, but also a sizable British force as well. Within six weeks, the Germans defeated the Allies and seized control of France. By 1944, the Germans knew that the Allies, also now including the United States, among others, would attempt an invasion of France to liberate Europe from Germany. The Allied forces, based in Britain, decided to begin the invasion by landing a huge army at a place called Normandy Beach, which is located on the northwest coast of France. Code-named "Operation Overlord", and commanded by American General Dwight D. Eisenhower, the Allies landed on June 6, 1944 at five beaches in the Normandy area with the code names of: Utah Beach, Omaha Beach, Gold Beach, Juno Beach and Sword Beach. Prior to the actual amphibious invasion, Allied planes pounded the Nazi defenders and dropped thousands of paratroopers behind German lines the night before the seaborne landings. Local French Resistance forces, alerted to the imminent invasion, engaged in behind-the-lines sabotage and combat against the occupying Germans.

156,000 American, British and Canadian troops met heavy resistance from the German forces defending the area, but were able to punch inland, securing safe landing zones for reinforcements. The German failure to successfully defend the Normandy area from the Allied liberation forces in essence doomed Hitler's dream of a Nazi controlled "Fortress Europe" and marked the beginning of the end for Germany.

The exact number of men on both sides who died that day will probably never truly be known. By the end of the of the entire Normandy Campaign, nearly 425,000 Allied and German troops were killed, wounded, or missing.

More summaries and resources for teaching or studying D-Day.