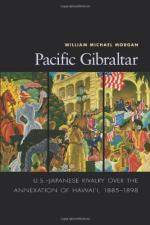 Get Annexation of Hawaii from Amazon.com
View the Study Pack

This student essay consists of approximately 3 pages of analysis of Annexation of Hawaii.

Summary: An overview of the events that led to the annexation of Hawaii by the United States in 1898 and the establishment of Hawaii as a U.S. territory in 1900.
ANNEXATION OF HAWAII

Hawaii is a chain of 8 large islands and many smaller islands. The islands are about 2,000 west of California. Around the 1790s the Hawaiian people lived in independent

communities. The communities had its own chieftain, and lived by farming and fishing.

Hawaii was annexed to the United States in 1898. There were many events that led to the annexation of Hawaii. In the 1790s the U.S. began trading with Hawaii for local resources. Also around that time the King Kamehameha I unified the islands. Hawaii's ports started to grow, and trade increased. In the 1820s the Christian missionaries began arriving, bringing Schools, created a written Hawaiian language, and translated the bible. Also, many American merchants came to settle there to. In the 1830s an American firm introduced sugar cane to Hawaii. The missionaries and merchants started to buy land and started sugar plantations...

More summaries and resources for teaching or studying History of Hawaii.