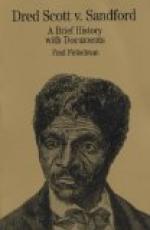 Get The Dred Scott Decision from Amazon.com
View the Study Pack

This student essay consists of approximately 6 pages of analysis of The Dred Scott Decision.

I. Dred Scott Decision A. Was an important ruling by the Supreme Court that had a great deal of influence on the

by Congress. D. The decision led the North one step closer to entering the Civil War.

II. The life of Dred Scott

A. Scott was born into slavery in Virginia around 1800.

B. In 1830 Scott was sold to John Emerson in St. Louis and then moved Scott to Fort Snelling. C. Scott married a slave named Harriet Robinson at fort Snelling. D. Scott and his wife had two daughters .