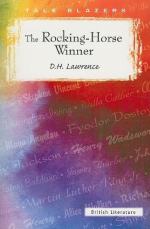 Get Lessons Learned in the Rocking Horse Winner from Amazon.com
View the Study Pack
View the Lesson Plans

D. H. Lawrence
This student essay consists of approximately 2 pages of analysis of Lessons Learned in the Rocking Horse Winner.

Summary: Rocking Horse Winner - DH Lawrence Priorities: Money vs. Family
In The Rocking Horse Winner, by DH Lawrence, one of the first lessons a young boy named Paul learns from his mother is that money was everything a person needed and luck was the best or perhaps the only way to get it. The mother cares more about money and social status than her own family, blaming her lack of luck on her husband. Facing the pressure to become lucky, Paul is seeking quick solutions on his level. His rocking horse acquires symbolic meaning connecting his life with the world of racing and gambling.

Gambling has symbolic meaning too, as winnings are based on luck. The boy rides his rocking horse until he knows which horses to bet on for the upcoming races, and never loses. His mother keeps saying that she is unlucky, and that luck brings money, so Paul decides to help her because "[he is] a lucky person."

The mother keeps thinking about money and how she wants more of it, and she never pays attention to anything else. Not only does she not notice what is going around her, she doesn't really seem to care. As it says on page 446 of Literature and its Writers, "`I never told you, Mother, that if I can ride my horse, and get there, then I'm absolutely sure - oh absolutely! Mother, did I ever tell you? I am lucky!'

`No, you never did,' said the mother." Paul was awfully sick and was obviously dying, but the mother didn't really seem to notice or, to the matter, even care, and when he asked her a question, she answered coldly.

Furthermore, since she is so obsessed with money, when she gets a little, she wants even more (give her an inch, she grabs a mile). She doesn't appreciate the more important things in life such as her husband and kids, nature, all her belongings, and more to the point, life itself!

Money is corrupting the community since it has become the center of one's life.

In conclusion, how the mother acts towards her family, mainly her children, her lack of care and appreciation for her surroundings and obsession over getting more money proves that money has corrupted the community.

More summaries and resources for teaching or studying The Rocking-Horse Winner.