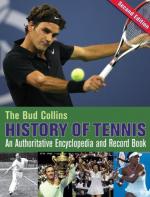 Get History of Tennis from Amazon.com
View the Study Pack

This student essay consists of approximately 5 pages of analysis of History of Tennis.

Summary: Overveiw of how tennis evolved.
History of Tennis

The origins of tennis date back to the Middle Ages, where people played a game that resembles today's tennis. However, they played using their bare hands to hit the ball, instead of racquets like they do today. Eventually the game evolved and adapted the name of `Royal Tennis', because it was usually only played by royalty. Later `Royal Tennis' evolved into `Lawn Tennis'. Even though Major Thomas Henry Gem is known for `adapting' or playing Lawn tennis first, Major Walter Clopton Wingfield is most often credited for inventing the game.

During the 16th, 17th, and 18th centuries real tennis became very popular with kings and nobleman and was at that time called `Jeu de paumme', meaning the game of the palm. When players would begin the game they would shout `tenez', meaning play, and the game soon became known as `royal' or real tennis.

More summaries and resources for teaching or studying Tennis.