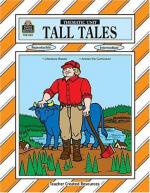 Get Epics Vs. Tall Tales from Amazon.com
View the Study Pack

This student essay consists of approximately 2 pages of analysis of Epics Vs. Tall Tales.

Summary: This is about how tall tales and epics compare and contrast.
Two exceedingly popular types of stories are epics and tall tales. Many of them are known nation wide. They are both very entertaining types of stories. There are numerous similarities and differences between the two.

Tall tales are in various ways different from epics. One way in which they are diverse is that tall tales are American-based. An example for a tall tale that is American-based is Paul Bunyan because it explains how things like the Great Lakes and Death Valley were created. Tall tales are also terse and silly is another. A superior example of a tall tale that is terse and silly is Pecos Bill because the way Pecos Bill could live with the wolves and speak their language was rather silly. Tall tales are not formally written and are also fictional. Another thing is that they don't have a definite ending.

However, there are several similarities between epics and tall tales. For instance, they both are extremely exaggerated and non- existent. Another thing is that they both involve heroes and villains. Personification is also often used in both types of stories.

More summaries and resources for teaching or studying Tall tale.