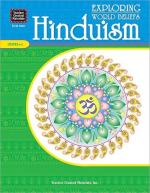 Get Hinduism and Buddism from Amazon.com
View the Study Pack

This student essay consists of approximately 3 pages of analysis of Hinduism and Buddism.

There are several similarities between the Hinduism and Buddhism beliefs. The Hindu people and the people of the Buddhist religion both emphasize the illusory nature of the world. They also believe in the role of Karma in keeping men bound to this world. Another thing these religions have in common is their belief in reincarnation. These two religions both emphasize and promote compassion and nonviolence to all living things. This is because they believe that there is a connection with their God's and nature. These two religions both believe in heaven and hell.

More summaries and resources for teaching or studying Hinduism.