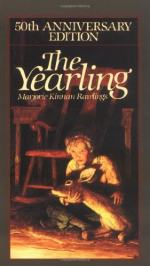 Get The Yearling from Amazon.com
View the Study Pack
View the Lesson Plans

Marjorie Kinnan Rawlings
This student essay consists of approximately 2 pages of analysis of The Yearling.

This novel is at the Florida backwoods during the civil war. It describes Jody growing from childhood to manhood. Jody's parents are Ora Baxter, a big humorless woman. Although she has had seven pregnancies, Jody is the only surviving child, Penny Baxter, Jody's father, is a small and wiry man. The beginning of the novel highlights Jody's lack of responsibility towards his chores in the farm. The Yearling, by Marjorie Rawlings, illustrates how Jody's sense of responsibility helped him to resolve his conflicts between meeting his own need to raise the fawn, and meeting his family's need for survival.

Jody's sense of responsibility helped him to enjoy his experiences in raising the fawn Jody became more responsible from childhood to manhood, he got more...

The Yearling from BookRags. (c)2021 BookRags, Inc. All rights reserved.