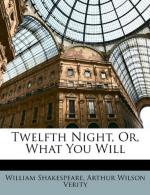 Get Olivia Unifies the Plots in "Twelfth Night" from Amazon.com
View the Study Pack
View the Lesson Plans
Related Topics
The Winter's Tale
Venus and Adonis

William Shakespeare
This student essay consists of approximately 2 pages of analysis of Olivia Unifies the Plots in "Twelfth Night".

Summary: The character of Olivia unites the three separate plots in William Shakespeare's play "Twelfth Night." She is involved in the love triangle between Viola and Duke Orsino, the cause of Malvolio's guiling, and the culprit behind the duping of Sir Andrew.
OLIVIA UNIFIES

Olivia is involved in the love triangle with Violia and Duke Orsino. Duke Orsino appears to be in love with Olivia, but she does not love him. When Cesario joins into the plot, Olivia falls in love with him, but he loves the Duke. Also in this love triangle Sebastian suddenly married Olivia and he said "having sworn truth, ever will be true" (IV,3,33). Not only does Olivia love Cesario or Sebastian, but Malvolio came to believe that she loved him.

Maria plans to gull Malvolio by writing a letter. Her handwriting is very similar to Olivia's, which makes the plan even more devious. It is suppose ti make Malvolio think that the letter is from Olivia and that it is for him. During his gulling, Olivia and him had a conversation, Olivia: "wilt thou go to bed, Malvolio? [Malvolio].. Ay, Sweetheart."(III,4,29-30) Malvolio was not the only one being tricked due to Olivia, but Sir Andrew was too.

At the beginning of Sir Andrew's duping, Fabian told him "She did show favour to the youth in your sight only to exasperate you..." (III,2,15-16). Fabian was trying to make a fool of Sir Andrew so he also said "This was a great argument of love in her toward you" (III,3,9), Sir Toby delivered his challenge to Cesario. Thoe both of them fought cowardly, and after Sir Andrew wanted to slap Cesario. He had slapped Sebastian, thinking it was Cesario, so Sebastian returned a few more back to him. Olivia stopped the fight and took Sebastian back to her house and they got married.

The three separate plots in this play are unified by Olivia's character. She was in the love triangle between Duke Orsino and Viola, but fell in love with Sebastian. Malvolio's gulling was caused by her. Olivia was the reason for Sir Andrew's duping. Thus Olivia is able to tie the different Plots together.