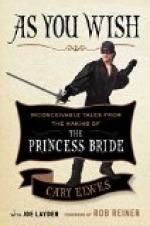 Get The Princess Bride Review from Amazon.com
View the Study Pack
View the Lesson Plans

William Goldman
This student essay consists of approximately 3 pages of analysis of The Princess Bride Review.

Summary: This is the review of the princess bride, a hilarious romantic film about a beautiful commoner, Buttercup and her separation from her one true love, Westley.
The Princess Bride - Film Review

`The Princess Bride' is a hilarious romantic tale about a beautiful commoner, Buttercup and her separation from her one true love, Westley. After being informed of his death, Buttercup wept and swore never to love again. However, the evil crown prince, Humperdink issued the royal command that Buttercup wed him and Buttercup had no choice but agree. When the princess-to-be was kidnapped by a trio of rogues, the man in black came to the rescue. Little did Buttercup know who the man really is.

The story began with the grandfather (Peter Falk) narrating a story to an incredibly...