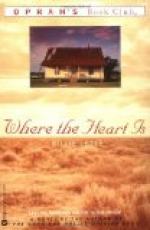 Get Where the Heart Is - Highlights and Personal Opinion from Amazon.com
View the Study Pack
View the Lesson Plans

Where the Heart Is Essay | Essay

Billie Letts
This student essay consists of approximately 5 pages of analysis of Where the Heart Is.

Where the Heart Is - Highlights and Personal Opinion

Highlights of the Story:

Novalee Nation is seventeen, seven months pregnant, 37 pounds overweight and superstitious of the number seven. Novalee and her boyfriend, Willy Jack Pickens, were on their way to start a new life in California. Novalee has dreams of a house without wheels and a real family, both of which she has never had before. She wants to document their journey with pictures for the baby by taking a photograph as they crossed over every state line. Willy Jack is getting impatient with Novalee having to go to the bathroom all the time. He also thinks her dreams and pictures are a silly waste of time.

After she makes Willy Jack stop for another bathroom break, he abandons Novalee at a Wal-Mart in Sequoyah Oklahoma. She is stranded with only $7.77 in her pocket and her Polaroid camera. Before...

More summaries and resources for teaching or studying Where the Heart Is.

Where the Heart Is - Highlights and Personal Opinion from BookRags. (c)2021 BookRags, Inc. All rights reserved.