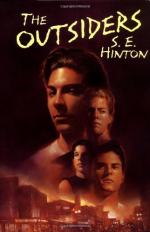 Get The Outsiders - An Analysis of Sodapop from Amazon.com
View the Study Pack
View the Lesson Plans

S. E. Hinton
This student essay consists of approximately 2 pages of analysis of The Outsiders.

The Outsiders - An Analysis of Sodapop

Summary: Discusses the novel, The Outsiders, by S.E. Hinton. Provides a brief character study of Sodapop, Ponyboy's happy-go-lucky, handsome brother.
Ponyboy's happy-go-lucky, handsome brother, Sodapop, is the middle Curtis boy. Caring and patient, Soda always stands up for his younger brother, Ponyboy. Unlike other members of the gang, Soda is very sympathetic. Although he is not a major character in the novel, he plays a significant role in a family of three.

Throughout the novel, an incident occurs that causes Pony and Johnny to hide in an abounded church on top of Jay Mountain in Windrixville for a week. During that week, Soda cried every night [174]. He thought that Dallas knew where they were and gave him a letter to Pony. He was worried sick about where he was. He cares about every member of the gang. Whenever a member was hurt physically or emotionally, he was always there to comfort them [example on P.7].

Many times when Pony and Darry were arguing, Soda was put in a position that he disliked; taking sides, he explained ."..it's like I'm the middleman in a tug o' war and I'm being split in half." [175]. Soda didn't say anything about his feelings until nearing the end of the book; he had had enough of his two brother's bickering and told them that they need to stop their fighting.

Pony's description of Soda is that he understands everybody [8]. Soda is full of sympathy; he gets the fact that Darry is attempting to provide Pony with a chance that he let pass and the reality of Pony's feelings [175-176]. He tried his best to apply what he understands about all the ones that he loves to help them out through their struggles.

This character is an enthusiastic teenager that loves life. He's a loving and responsible brother of two. Although he's a dropout, he succeeded in assisting to create a better family. His cheerful smile sure does make everybody happy. Confident in what he does, he can definitely be friends with anybody.

The Outsiders - An Analysis of Sodapop from BookRags. (c)2022 BookRags, Inc. All rights reserved.