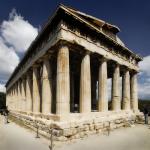 Get Ancient Greek Contributions to Western Civilization from Amazon.com
View the Study Pack

This student essay consists of approximately 3 pages of analysis of Ancient Greek Contributions to Western Civilization.

One way that ancient Greece affected western civilization is politics. Greece had the first known democracy. The Greek states man Pericles had three goals, to Strengthen Democracy, Hold strength in the empire, and to glorify Athens. Pericles stated that he wanted all citizens to have an equal opportunity to serve the public. The Greeks affected many of our constitutional rights. In both the US democracy and the Athenian democracy political power can be exercised by citizens. An example of the political power to be exercised by the citizen in Athens was that laws were voted on and proposed directly by assembly of all citizens. In the US when citizens are...

More summaries and resources for teaching or studying Ancient Greece.