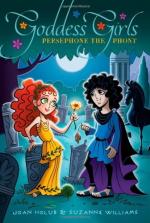 Get Persephone from Amazon.com
View the Study Pack

This student essay consists of approximately 2 pages of analysis of Persephone.

Summary: Describes the Greek goddess Persephone and explores the myth of how she was taken by Hades to the underworld.
Persephone was the daughter of Demeter who is said to be one of the seven wives of Zeus before he married Hera. Persephone lived happily among the nymphs and didn't think about marriage. She was in a lush meadow picking flowers when she came to the hundred-blossomed narcissus that had been planted by mother Earth Gaia to please the God of Death Hades, Persephone's uncle. When she went down to pick a flower a chasm open in the ground and Hades emerged and immediately fell in love with Persephone. He took her with him to the underworld.

Soon Demeter, her mother, began to realize that her daughter was missing. Demeter called for her many times and Persephone did not respond. For nine days and nine nights Demeter wondered the world in search of her daughter. On the tenth day, she met Hecate, who had heard Persephone when she was taken away but did not see her kidnapper because his face was covered with darkness. Only the Sun could tell the upset mother what she wanted to know about Persephone. When Demeter found out what had happened she was in such anger the world became sterile. She planned to keep the world this way until her daughter returned to her. In a disguise Demeter went to a stone, sat on it and named it "The Stone without Joy."

Demeter exile had upset the world so much that Zeus, who had secretly given his approval to the kidnapping of Persephone, ordered Hades to let Persephone return home. Hades replied "It was not possible any longer." Anyone who had crossed the threshold of Tartarus could only return if he or she looked at certain rules, especially if he or she had refused to eat food during their visit in the underworld. Persephone, while walking in the garden of Hades had eaten a pomegranate seed and had been seen by the son of the nymph Styx. He told his father Styx who in turn told Hades. Demeter wouldn't give up. A compromise was reached: if Demeter would go back to her occupation as a nurse, then Persephone would only have to stay a half of a year in the underworld, the other half she could spend with her mother. The compromise was settled.

More summaries and resources for teaching or studying Persephone.