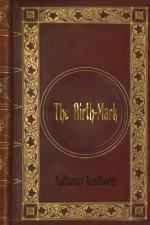 Nathaniel Hawthorne
This student essay consists of approximately 2 pages of analysis of The Birthmark.

Theme is the massage or central idea that is implicit in a story, a recurring theme that appears in his stories is trying to play the role of god. The reader infers the theme from the characters' actions, the resolution of their conflicts, and the symbols the author uses. I will be summarizing The Birthmark. The Birthmark is a story of a man who sees defect in his wife in the form of a birthmark. What some people would see as beauty, the main character Alymer sees as evil, and defection. Although in the end Aylmer gets what he was seeking, he loses Georgiana.

The characters in "The Birthmark" have symbolic characteristics to depict the theme. In The birthmark Georgiana's birthmark could represent, as some religions believe, the original sin which is bestowed on all by the "hand" of god. The first and most evident symbol is the face of Georgiana. Georgiana's birthmark is the shape of a hand. I think that Hawthorne chooses to focus on the peoples faces because a person's face is pretty much the center of their being. The face is where a person shows the majority of their emotions, and it holds the brain, which well, is where everything starts at. So, a person's face is very important.

The attempts of Aylmer to '"'play god'"' and heal Georgiana worked, but in the end it also ended up costing her life. This may represent the fact that we are born the way god wants us to be, and we really should accept people as they are. This acceptance was something that Aylmer could not handle because of his personality. In "The Birthmark" Georgiana is afraid of her husband.

I think that these two stories represent the inner struggle that we all have in our endeavors to achieve perfection, and hide our own faults from the world. These efforts will eventually drag some of to our ends.

The Birthmark from BookRags. (c)2022 BookRags, Inc. All rights reserved.