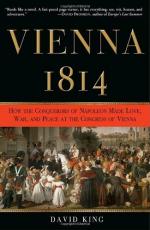 Get Congress of Vienna from Amazon.com
View the Study Pack

This student essay consists of approximately 2 pages of analysis of Congress of Vienna.

Summary: Explains the challenges that the Congress of Vienna had to face to achieve their goals. Describes it contributed to the history of Europe and changed maps and territories of certain countries.
During the rule of Napoleon Bonaparte most of European countries were dissatisfied about the fact that they were under a rule of a foreigner. Some of them were furious about the reforms that Napoleon brought along; some of them cherished the hope of getting their old order back. So each and every single mistake of Bonaparte was closely watched and analyzed and his every move could be used against him. In 1813, Napoleon was defeated by the combined armies of his enemies. Soon after hid defeat the Quadruple coalition was formed, which consisted of Russia, Prussia, Austria, and Britain. They all gathered at the Congress of Vienna. The main problem discussed at the Congress was obviously France. The territory of France was definitely limited and certain boarders were set, but it still remained a fifth great power. France, however was not the only change made by the Congress of Vienna. The most significant results were the re-ordering of other European countries and the territory agreement in Eastern Europe.

The four great powers thought through the reforms that should be applied to all the nations that were altered during the reign of Bonaparte. After the Congress of Vienna, the kingdom of Netherlands appeared, Germany remained almost unchanged, and the Holy Roman Empire was never brought back to existence. The republic was strongly rejected all over Europe. The legitimate monarchs took over the rule.

The problem appeared as the Congress got to the point of settling the Eastern Europe. The countries were divided among the different nations and none of the rulers was willing to share the land with any other state. For example, Tsar Alexander claimed Poland as his property. However, Prussia and Austria possessed parts of Poland as well. Prussia was willing to trade its share off, but Austria was stubbornly holding onto its part of Poland. A secret treaty was made between France, Britain, and Austria. After the treaty, Alexander agreed to have his share of Poland and Prussia received parts of Saxony.

All the results of the Congress of Vienna were quite significant because they contributed to the history of Europe. The settlements of the Congress changed maps and territories of certain countries. The main goal of the Congress was to prevent any other leader from ever dominating the whole Europe. This goal was achieved since Napoleon was the last to ever conquer that many nations.

More summaries and resources for teaching or studying Congress of Vienna.