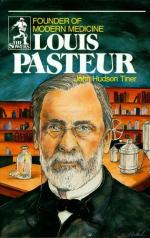 Get Louis Pasteur from Amazon.com
View the Study Pack

This student essay consists of approximately 3 pages of analysis of Louis Pasteur.

Summary: Describes the life of French Scientist Louis Pasteur. Describes his early life, education and training. Details much of his work and founding of the Pasteur Institute.
Louis Pasture was born on December 27, 1822 in Dole, an eastern French town. Dole is in the region of Jura, France. His father was a tanner and was a former veteran of Napoleon's Grande Armee. He moved to Arbois when he was a young boy. He was not a particularly good student but he liked math and painting.

In 1840, he was given a BA degree from the Royal College in Besancon. Then he went to the Ecole Normale Superieure in Paris to study chemistry. He got the award of Master of Science in 1845. Later he got an advanced degree in physical sciences and won his doctor of philosophy in 1847.

In 1848, he became professor of Physics at Dijon Lycee. Then in 1849 he became a Professor of Chemistry at the University of Strasbourg. On May 29, 1849 he married Marie Laurent. Together they had five children and only two survived their childhood.