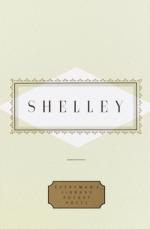 Thomas More
This student essay consists of approximately 2 pages of analysis of Shelley's Contribution to Literature.

Summary: Explores the poetic contributions of British poet Percy Bysshe Shelley. Considers how his poetry reflected the Romantic era, of which he was a part.
Percy Bysshe Shelley was a man and writer with an open mind and full of eagerness to envisage new means for human experience and expression. He is one the most famed poets of the Romantic era. There was monarchy during his time period. He devoted himself to the Romantic poets, and social movements. His father was a wealthy and dedicated squire who believed in Catholicism and monarchy. Shelley was determined to be in conflict with the forces of injustice, which led him to fight against his father and his beliefs. Although he was dispossessed from his father's inheritance, he never gave up working in his way. He published pamphlets, poems, and essays towards monarchism, aristocracy, atheism, and love.

Shelley's political and religious views in a fight against social injustice got him into controversies with his family. His family was angry that Shelley came from a family connected with Catholics. His father thought that Shelley lowered his family's pride. He worried about his seat in Parliament. Shelley inspired other people but not his father. He stimulated his college friends' creativity by issuing "The Necessity of Atheism." He also participated in radical groups. People were treated with cruelty by tyrant kings. He sought the rights of humans. He inspired people to object to living in better conditions.

Shelley knew that monarchism was the wrong form of management. He wanted the governors to treat public equally, and give them more rights which we call today democracy. He knew that aristocracy wasn't good for human experience, so he wanted to make other people realize his point of view. He was on the right track in order to improve the existence of human beings.

He inspired me with courage and resolution. His ultimate purpose was freedom. He incited a nation to areise against that kind of policy. He maybe wasn't so successful during his period of time, but I can say that he foresaw the modern form of policies. Seeking for true love, and the determination he had in his difficult lifetime made me choose him.