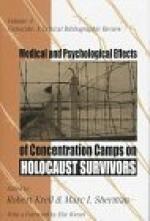 Get Holocaust Concentration Camps from Amazon.com
View the Study Pack

This student essay consists of approximately 4 pages of analysis of Holocaust Concentration Camps.

Summary: Describes the experience of living in a concentration camp during the Holocaust. Explains how the Nazis determined what people would be sent there. Compares the genocide of the Jews to modern examples of genocide.
Concentration camps were places where groups of people are confined, usually for political reasons and under inhumane conditions. Men, women, and children are confine without normal judicial trials for an intermediate period of confinement. Camps usually consist of barracks, huts, or tents, surrounded by watchtowers and barbed wire.

Adolf Hitler who was the ruler of Germany felt that the Jewish people were weak, and he decided that they needed to be killed in order to build a superior society. This is called Genocide. Which still occurs today in several countries. Saddam Hussein is accused of that today.

The Mauthausen concentration camp was the most infamous camp in the entire Nazi alternate universe of human destruction. Many of the people in Mauthausen, most of which, innocent of any crimes, were tortured to death in its rock quarry. Mauthausen was ran by Chief of SS, Heinrich Himmler.