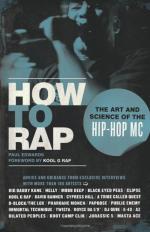 Get Lyrics in Modern Rap Music from Amazon.com
View the Study Pack

This student essay consists of approximately 2 pages of analysis of Lyrics in Modern Rap Music.

Summary: Discusses rap music and examines how it affects youth in todays society, influencing them with bad ideas and thoughts.
Words like nigger and other cursing words are dangereous .Racial and sexual epithets,wheter screamed across a street or camafluged by the rhytyms of a song, turn people into objects less than human- easier to abuse, easier to violate and destroy. What is even more horrible is that societythey are being supported by some of the very peoplethey lessen or reduce.Youth are being sold a social dictionary that says racism,sexism, and violence are acceptable in our society.

Alvin Posusant, a Harvard phisiatrist who is black believes that the widesprad acceptance of such degrading and denigrating images may reflect low self-esteem among black men in todays society. There are few postive black male role models in todays society. The fact is neither racism,sexism or violence should be accepted. yet in some instances the acceptance of such rap music with ill messages has reached large proportions.

Some facts about racism and sexism and violence are astonishing to tell. For example, in America a womann is raped once every six minutes. A majority of children surveyed by a rhode island rape crisis center thought rape was acceptable. In new york city rape arests of 13 yaer old boys have increased 200 percent int he past two years . it is true no one is saying this happens only beacsue rap music or rock music, but ceratinly kids are influenced by the glorification. they are not born with ideas of prejudice-they learn from what they see in the world around them. If their worl promotes and glorifies violence.

Everyone in our society as educators,principals, and other authorities have to send the message loud and clear through our homes, our schools,our streets, as well as our art and culture.