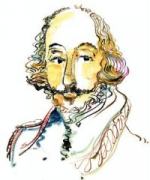 This student essay consists of approximately 2 pages of analysis of William Shakespeare, a Biography.

Summary: Provides biographical detail on the life of William Shakespeare. Briefly describes his writing style.
"Shall I compare thee to a summer's day"" These famous words were written by William Shakespeare, one of the most well known poets throughout the world. He was also a playwright and actor. Some of his most famous works include Romeo and Juliet, Macbeth, the Tempest, and Hamlet.

William Shakespeare was born to John Shakespeare and mother Mary Arden some time in April 1564 in Stratford-upon-Avon. There is no record of his birth, but his baptism was recorded by the church, so his birthday is assumed to be the 23 of April. His father was a prosperous alderman in the town of Stratford-upon-Avon, and was later granted a coat of arms by the College of Heralds. Not much was known of Shakespeare's youth. It is presumed that he attended the Stratford Grammar School, and did not go to Oxford or Cambridge. He was one of 8 children. The writing on his tombstone says that he died April 23 1616, exactly 52 years after his birth. His father lost his fortune and Shakespeare never finished school. In 1582, at age 18, he married Ann Hathaway who was 26. She bore him 3 children.

Shakespeare wrote sonnets with different emotions: happy, sad, or funny. Shakespeare followed the more idiomatic rhyme scheme, not the formal one. This scheme links the rhymes of two pairs of couplets to make a quatrain, then, builds the whole sonnet of three differently rhymed quatrains and a concluding couplet. A common rhyme scheme of his sonnets was: a, b, a, b, c, d, c, d, e, f, e, f, g, g. One of his most famous sonnets was Sonnet 18. Many of his most famous plays are still popular today including Julius Caesar, Macbeth, Hamlet, Romeo and Juliet and A Midsummer Night's Dream.

Shakespeare's work is studied by students today and performed and read worldwide. His life and writing has inspired movies such as "Shakespeare in Love", and his work is highly esteemed today. Shakespeare's play Romeo and Juliet inspired the modern day musical and movie "West Side Story."

As you can see, William Shakespeare has been very influential on the modern world. He has inspired great movies and wrote lines that will live on forever. His sonnets are still well known and moving emotionally. Shakespeare was a fantastic poet and he will always live on through his work.

More summaries and resources for teaching or studying William Shakespeare.