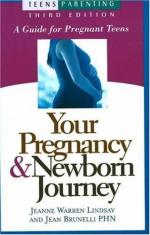 Get Teenage Pregnancy from Amazon.com
View the Study Pack

This student essay consists of approximately 2 pages of analysis of Teenage Pregnancy.

Summary: Provides a brief discussion of teenage pregnancy. Includes statistical data of occurrences in the United States.
Teenage pregnancy is a large and growing problem in the United States. There are almost a million pregnancies of women under 20 each year. 44% of those end up with death for the baby, through miscarriage or abortion (30% abortion 14 % miscarriage).

Giving up a child, whether to abortion or adoption, is a hard choice which can lead to many problems. Many times a teenage mother is living at home and must make the choice to tell their parents. In a personal case, the child told the mother that they were pregnant and didn't want to give up the baby. This woman was then kicked out of her house and had to find her own work. She didn't go on to college and doesn't know the father.

The campaign was more involved with trying to use peer pressure and negatives to stop teens from having sex. It showed a happy teen on top of the world and had no worries with lots of friends. On the other side it showed a sad cheerleader holding two babies with many people looking condescendingly at her. Since most teens still are thinking of the world only in respects to them they see this message as how other people would look at them if they had a baby.

I think that this campaign was decent. We should have focused on more than just one aspect of the consequences. We only showed the way other people would look at you if you had a child. We didn't show any of the other consequences. Another aspect we should have used was the decreased percent of finishing high school, only 64%. We also could have tried to use the choice of having an abortion after knowing that you are pregnant.

More summaries and resources for teaching or studying Teenage pregnancy.