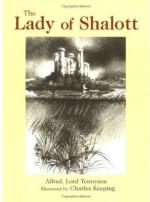 Get Tennyson's Sympathy for Women from Amazon.com
View the Study Pack
Related Topics
Ulysses_(Lord Tennyson)
The Charge of the Light Brigade (Lord Tennyson)

The Lady of Shalott Essay | Essay

Summary: Discusses Tennyson's poems Mariana, Lady of Shalott, Godiva. Describes how Tennyson understood the oppression of women and sympathized with their plight. Considers how his presentation of women in his poems demonstrates his feelings towards them.
Three of Tennyson's poems that I have read stand out as a presentation of women and their lives, Mariana; The Lady of Shalott; Godiva. In all of these poems the female is restricted or suffering in some way. This shows that Tennyson understood the oppression of women at the time of his writing and sympathised with their plight. His poems also express gender politics, indicating Tennyson's recognition and contempt of men's power over women.

Tennyson obviously had deep consideration for women as just one line in Shakespeare's Measure for Measure;

"There, at the moated grange, resides this dejected Mariana."

Inspired Tennyson to write this compassionate poem about the abandoned Mariana. The poem has been described by Glennis Byron as

"A description of an abandoned woman's state of mind"

Tennyson uses imagery and the structure of the poem to do this. The description of the gloomy scenery provides an...