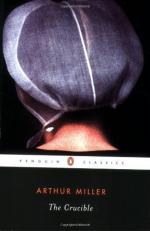 Get The Crucible and the McCarthy Era from Amazon.com
View the Study Pack
View the Lesson Plans

Arthur Miller
This student essay consists of approximately 2 pages of analysis of The Crucible and the McCarthy Era.

The Crucible and the McCarthy Era

Summary: Describes how the Arthur Miller play, The Crucible, relates to the persecution of innocent Americans during the McCarthy Era in the early 1950s.
In the play, The Crucible, the people were in search of a person accused of witchery. Many died because of the person that was indeed attempting witchery, but she was never captured. Many cases have ended in people going to jail because of the person attempting witchery. There is much plotting, accusing and backstabbing going on just to save themselves.

In The McCarthy Era, Senator Joseph McCarthy claimed that there was a "homosexual underground" that was abetting the communist conspiracy. The nation was getting stirred up by McCarthy. Between April-December 1950, homosexual workers were fired 60 per month. McCarthy himself was accused of being a homosexual. He was married to his secretary, adopted a child, but the rumors of his homosexuality continued to linger around.

McCarthy was pointing the finger at homosexuals like Abigail was pointing the finger at Mary in The Crucible. McCarthy was accused of being a homosexual was accused of being a witch by the church at the beginning of the story, but the other girls were able to throw some of the attention off of Abigail, allowing her to escape alive at the end. This is where the McCarthy incident and The Crucible start to differ. While Abigail was able to get away alive, McCarthy didn't get away so easy with what he was doing. President Eisenhower was unhappy with what McCarthy was doing and decided to put an end to his little witch hunt he was running. December 2nd, a censure motion condemned McCarthy's conduct, and he lost his power. He eventually died in 1957 from cirrhosis of the liver.

Arthur Miller probably felt the need to remind Americans of the events that happened in old Salem because this is still going on today. People are still being discriminated against because of their sexual preference and are getting punished for it. They are getting targeted just as innocent people were in old Salem.

The Crucible and the McCarthy Era from BookRags. (c)2021 BookRags, Inc. All rights reserved.