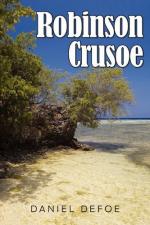 Get Robinson Crusoe, a Summary from Amazon.com
View the Study Pack
View the Lesson Plans

Daniel Defoe
This student essay consists of approximately 4 pages of analysis of Robinson Crusoe, a Summary.

Summary: Summarizes the novel Robinson Crusoe, by Daniel Defoe. Details the action and provides brief descriptions of Crusoe and Friday.
The action

In the novel Robinson Crusoe, Daniel Defoe presents the life of one man who lived on a desert island for twenty-eight years . Robinson Crusoe was born in 1632 in York city in a good family . He had two elder brothers . Since he was a child, he was attracted by sailing . When he had nineteen years old he ran away from home to sail with a fellow . They had wrecked and the crew was saved . Then he met in London a captain and they tripped to Guinea . On this trip they were attacked by a pirate ship from Sale and he became slave . He escaped and the he sailed to South and continued his travel to Guinea. The ship wrecked and the all crew died except Robinson Crusoe who woke up on a desert island . He thought about his condition and he built a place to stay and...