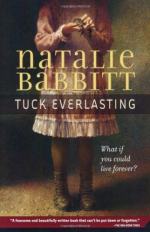 Get Tuck Everlasting, A Review from Amazon.com
View the Study Pack
View the Lesson Plans

Natalie Babbitt
This student essay consists of approximately 1 page of analysis of Tuck Everlasting, A Review.

In the beginning of the book there was a girl named Winnie. She was 17 years old and Winnie hated how the Fhosters, which is her family, told her to be a normal girl. Her family owned the forest. When she was running away she met a guy named Jessy. He said he was 104 years old and told Winnie about the water which could give her eternal life. There was a guy who was following Jessy and was sneaking on what he was doing, his name was Miles. Miles saw him drink the water so he drank it to and Miles got shot and when he saw himself he was still alive, that's how Miles new about the water. Winnie ran away of the Fhosters because her family were giving her too much pressure. There was also a poor family named the Tuckers and Jessy was part of the Tuckers, everyone in the Tuckers knew about the water.