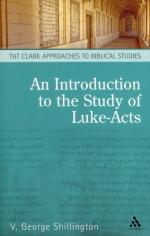 Get A Study of Luke and Acts from Amazon.com
View the Study Pack

This student essay consists of approximately 2 pages of analysis of A Study of Luke and Acts.

A Study of Luke and Acts

Summary: Discusses Christianity as detailed in the bible chapters Luke and Acts. Analyzes miracles as an act of God. Details an example of a miracle from the New Testament.
a.) In the dictionary the word miracle is described as `an event that appears inexplicable by the laws of nature and so is held to be supernatural in origin or an act of God.' Katherine Anne Porter (a famous author) tells us that `miracles are spontaneous; they cannot be summoned, but come themselves.' A miracle would be considered to be outside of the laws of nature and physics e.g. a man managing to lift the wheels of a large truck that was trapping his child.

But from these descriptions the full picture is not truly given; it is the belief of Christians and the Bible that a miracle is perceived as an act of God and that no human in the world today could ever perform such a task unless he was working on Gods' authority. No reason is apparent for a particular event occurring and that only a higher hand intervened. It is their belief that only God and Jesus were able to create such wonders and inexplicable events. Witnesses were at the scene of many miracles performed by Jesus giving credibility to these astounding occurrences. There are perceived to be many types of miracles, an example from the New Testament (Luke 8:40) is that of a woman with haemorrhages and the healing of a dead child. The woman touched Jesus' robe and was instantly healed and Jesus told the father of the child to believe that she was alive and from this she arose from the dead.

So it is shown that miracles are yet to be understood/tested fully, perhaps upon further research, knowledge and factual evidence and understanding of God and his word progresses, in years to come we shall be able to acknowledge and recognize `miracles.'

More summaries and resources for teaching or studying Gospel of Luke.

A Study of Luke and Acts from BookRags. (c)2021 BookRags, Inc. All rights reserved.