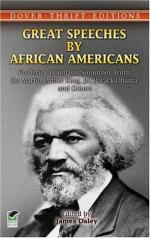 Get The Role of Martin Luther King in the American Civil Rights Movement from Amazon.com
View the Study Pack

This student essay consists of approximately 6 pages of analysis of The Role of Martin Luther King in the American Civil Rights Movement.

Martin Luther King Junior was born into a black middle class family in Atlanta Georgia on the 15th of January 1929. This date is now a national holiday in America. This emphasises how important many Americans believe Martin Luther King was in the civil rights movement. King's father was a Baptist minister in Atlanta Georgia. He was educated at Morehouse College and this is where he was heavily influenced by the president of the college Benjamin E. Mays. Mays felt strongly about racial injustice and had strong beliefs in Christian's sense of responsibility. So, although King never really faced racism directly in his early years his strong religious grounding and Benjamin E. Mays beliefs meant that King had very strong views from an early age.

When King had finished at Morehouse he went on to study for the Baptist ministry at Crozer Seminary (a training ground for ministers). He...

The Role of Martin Luther King in the American Civil Rights Movement from BookRags. (c)2021 BookRags, Inc. All rights reserved.