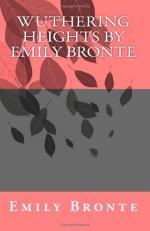 Get Wuthering Heights: A Character Analysis of Catherine Linton from Amazon.com
View the Study Pack
View the Lesson Plans

"Nelly, I see now you think me a selfish wretch; but did it

never strike you that if Heathcliff and I married, we should be

beggars? whereas, if I marry Linton I can aid Heathcliff to rise,

and place him out of my brother's power.'"

Wuthering Heights is a Victorian novel set within the heart of the English Country with characters just as captivating as the scenery portrayed. On of those characters is Mrs. Catherine Linton. Well intended, but having the wrong idea, totally describes the character of Mrs. Catherine Linton. She is a strong willed spirit, but at some times, can be illogical with her decision-making. She suffers extensively from what I believe to be Munchausen Syndrome, which is not especially apparent in this passage, but is hinted with some inference along with other dysfunctional characteristics.

Within this passage lies the heart of the story behind Wuthering Heights. The problem, however, is the nature behind Catherine Linton's romantic ideology. Perhaps her seclusion in the backcountry of England gives her this basis. She boldly loves Heathcliff for who he is, but she has more than the way she feels to consider when choosing who to be with. While she weighs the options of either being with the meager but alluring Heathcliff over the wealthy but displeasing Edgar Linton, she decides that her mental as well as her aesthetic needs could be both fulfilled. How sadly wrong she was. With her as the damsel in distress, it's hard to judge who was the dragon and who was the slayer between her two loves. These lines show her struggle, they show her ignorance, and give the reader the sense that her whole life revolves around herself. She liked the attention that she got from this predicament and will continue to get attention until it finally kills her.

The passage indicates a dilemma among one self. This type of problem usually centers on the ignorance of the subject. "An emotionally immature person with narcissistic tendencies, low self-esteem and a fragile ego," also known as Munchausen Syndrome. This diagnosis describes this circumstance with Mrs. Catherine Linton. It usually leads to a self-inflicting sickness ultimately leading to the deterioration of the mind and the body. It is in this one dialogue that defines her character for the rest of the novel. Good intentioned, but nonetheless has the wrong idea.