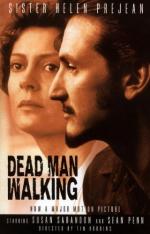 Summary: Provides a short analysis of the character of Matthew Poncelot from the film Dead Man Walking, starring Sean Penn. Includes a brief plot summary.
When I first saw Matthew Poncelot I could have sworn that he was an innocent man, I thought that the movie would be about a nun who freed an innocent man, but I was way off. I grew to realise throughout the duration of the movie that he wasn't as evil that he was made out to be. I wasn't sure what to think when he was saying that if he had a second chance he would be a terrorist and fly planes into government buildings, I thought that he was digging his own grave. I think he was very ruthless in his opinions and that he didn't care much for what other people thought.

I saw some change in him when he said that he wanted his mother to know that he didn't kill the children, but that only made matters worse when we found out that he did actually kill the children because then he would have been directly lying to his mother for the soul purpose of giving himself piece of mind. There obviously was a tender side of him when it came to his family, and he respected what the Sister did to try and help him, so there wasn't all malice in him. I don't think a man can change after doing something like that, there is something in him that made him do it and that thing, whatever it is, will never leave him. I don't however believe that he should have been put to death. Life imprisonment is probably what he should have had.

My first view of him was an innocent man that was wrongly accused, but as the movie went along he got guiltier and guiltier until he finally admitted that it was him that committed the crimes. I enjoyed the movie though it was very disturbing in places, it was very well done and very well acted.