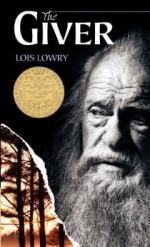 Get The Giver: A Review and Plot Summary from Amazon.com
View the Study Pack
View the Lesson Plans

Lois Lowry
This student essay consists of approximately 8 pages of analysis of The Giver.

The Giver: A Review and Plot Summary

Jonas -Jonas is the main character in the story. Jonas lives in a community where there is no harm that can be done. Jonas is always concerned about other people; he is an all around kind person. As the reader later discovers, the job of the Receiver of Memory is an extremely important position therefore; obviously, Jonas is a very special person. Jonas seems different from everyone else because he doesn't generally accept everything that goes on. He thinks that it is important that he has his own ideas. Jonas is also very different because he all the sudden begins to see color. Jonas seems to be rebellious because of some of the acts he carry's out. He goes against community rules Jonas wanted to be the Director of Recreation, but instead he was assigned an entirely different job. When Jonas turns twelve the age...

More summaries and resources for teaching or studying The Giver.

The Giver: A Review and Plot Summary from BookRags. (c)2021 BookRags, Inc. All rights reserved.