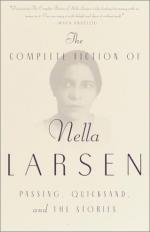 Get Power of the Word, How Jack's Speech Affects the Plot of "Passing" from Amazon.com
View the Study Pack

This student essay consists of approximately 6 pages of analysis of Power of the Word, How Jack's Speech Affects the Plot of "Passing".

Power of the Word, How Jack's Speech Affects the Plot of "Passing"

Summary: This is a thesis of "Passing" by Nella Larsen. Provides a character analysis of Jack, one of the characters in the novel. Describes how Jack's speech impacts the novel.
Power of the word

The term passing is mostly shorthand for a racial passing which means people of one race passing for another. Nella Larsen's Passing is the story about two light-skinned women, who both have African blood. Clare Kendry is one of them who chooses and succeeds at passing and Irene Redfield is one who doesn't. They drive into each other twelve years later in a restaurant and Clare invites Irene to the tea party. The tea party which appears in the beginning of the story plays an important role to throughout of the story because Jack Bellew enters the story at that moment. Jack is the white man who has strong revulsion at African-Americans. He marries to Clare, without knowing her secret ancestry. Jack's statements at the tea party lead the main characters' transformation throughout the story and shape the ending as well.

More summaries and resources for teaching or studying Nella Larsen.

Power of the Word, How Jack's Speech Affects the Plot of "Passing" from BookRags. (c)2021 BookRags, Inc. All rights reserved.