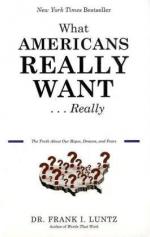 Get Who Are We as Americans? from Amazon.com
View the Study Pack

This student essay consists of approximately 2 pages of analysis of Who Are We as Americans?.

Who Are We as Americans?

Summary: Using several different sources, this essay describes what distinguishes the American people and government apart from others.
Lately, there has been a lot of controversy over Iraq and the issue of "forcing our government" upon their country. Considering this, I believe that it is necessary to remember exactly who we are and what our government and country represent.

In a sense, I am in agreement with John Steinbeck when he says, "we are a restless, a dissatisfied, a searching people...we go mad with dissatisfaction in the face of success" (Steinbeck 28), but I don't agree with him in the way that he meant it.

Steinbeck meant this to be pessimistic, describing Americans as materialistic and not appreciative for what we have. Although I agree with his statement, I think that being dissatisfied is not necessarily a bad thing.

Our history is filled with countless movements for equal rights or treatment, from the American revolution begun in 1775 to the recent gay rights movement, and they clearly...

More summaries and resources for teaching or studying American.

Who Are We as Americans? from BookRags. (c)2021 BookRags, Inc. All rights reserved.