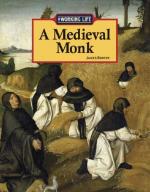 Get Life as a Medieval Monk from Amazon.com
View the Study Pack

This student essay consists of approximately 4 pages of analysis of Life as a Medieval Monk.

Life as a Medieval Monk

Summary: Provides an historical account of life for medieval monks. Reviews their clothing, duties and contribution to literacy and literature.
Life as a Medieval Monk

Medieval monks lived lives that were dedicated to God and medieval monks lived in a religious atmosphere, an environment of peace and order, prayer and work. They lived in reverence to build a strong relationship with God; and the monastery is a place where they can achieve spiritual and religious perfection.

They also choose to join the empire of God for their own personal enlightenment or they want to make a worthwhile dent into the community, by providing the community with services such as nursing and teaching.

Tasks in the Monastery

The monks from most of the medieval monasteries follow a set of rules. The set of rules are called the Benedictine Rule which meant that they followed in a vow of poverty; that they'd never have anything that they owned; a vow of celibacy; they are to never wed as a monk...

More summaries and resources for teaching or studying Monk.

Life as a Medieval Monk from BookRags. (c)2021 BookRags, Inc. All rights reserved.