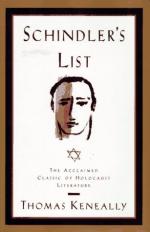 Get Schindler's List from Amazon.com
View the Study Pack
View the Lesson Plans

Literally, the Greek word means to be totally consumed by fire.

The holocaust has come to describe the brutal and systematic murder of six million innocent Jews by the nazi regime from 1933 - 1945.

In the movie Schindler's list, strong characteristics were portrayed in the main characters of Amon Goeth and Oskar Schindler, but these characters play only a minor part in Spielberg's real aim for the movie being that he wanted the viewers to see and understand about the holocaust.

Spielberg succeeded in his aim but not in the way people would have expected. Instead of using the main characters he made his point in other ways. He used all kinds of different cinematic conventions, symbolism and the most powerful was his choice of using a black and white picture.

More summaries and resources for teaching or studying Schindler's List.