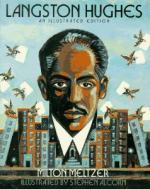 Get Langston Hughes and African American History from Amazon.com
View the Study Pack
View the Lesson Plans
Related Topics
I, Too
Harlem (Poem)

Summary: This essay describes how Langston Hughes relates to the African American history through some of his poems.

Langston Hughes was an African American poet who was one of the first black voices to be heard in America. He was distinct among his contemporaries with his writing about the blacks' experiences and history. His pride of his race and history was apparent in most of his works.

In his poem, "The Negro Speaks of Rivers" his pride of his history and civilization is apparent by the repetition of the pronoun "I" in most of the lines. He is proud that his roots go back to the ancient civilizations which where associated with the great Rivers of Asia and Africa namely the Euphrates, the Nile and the Congo.

Hughes repeats, "I've known rivers" which indicates the connection of black people with the beginning of human history.

He also repeats, "My soul has grown deep like the rivers" which suggests the wisdom that is related to rivers; it...

More summaries and resources for teaching or studying Langston Hughes.