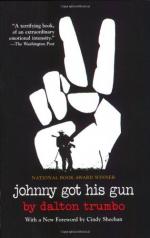 Get Johnny Got His Gun from Amazon.com
View the Study Pack
View the Lesson Plans

Johnny Got His Gun Essay | Essay

Dalton Trumbo
This student essay consists of approximately 7 pages of analysis of Johnny Got His Gun.

Johnny Got His Gun

Summary: Essay provides a chapter by chapter analysis of the book "Johnny Got His Gun."
Chapter 1

This chapter is called this because when he is dreaming he dreamt up the phone was ringing. While he is at work and they call him into the office and tell him the bad news. So when one of the workers herd this he offered to take him home. This is an important chapter because we learn that his father has died. John "Johnny" Bonham is the character in this story. He has had a terrible WWI accident. Johnny face as been blown off and he has no limbs due to the fact that he has stepped on a mind. OUCH!!!! Would be my reaction to his problem.

Johnny goes into the war. When he is looking back on his father death, he now gets regretful in that he had decided to join the war. It all seemed to be...

Johnny Got His Gun from BookRags. (c)2021 BookRags, Inc. All rights reserved.