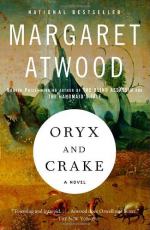 Get Religious Themes in Oryx and Crake from Amazon.com
View the Study Pack
View the Lesson Plans
Related Topics
The Heart Goes Last
Stone Mattress: Nine Tales
The Year of the Flood
MaddAddam
Hag-Seed
The Penelopiad
The Testaments: The Sequel to The Handmaid's Tale
Dearly

Margaret Atwood
This student essay consists of approximately 4 pages of analysis of Religious Themes in Oryx and Crake.

Religious Themes in Oryx and Crake

Summary: There are many religious, Christian metaphors in Atwood's Oryx and Crake. What is most interesting to consider, though, is the idea of Snowman as the only human, as a survivor, and most importantly as a representation of the biblical `serpent'.
It is in these representations of Snowman that I believe Atwood is making a definitive statement as to whether God created man or whether man creates God. Undoubtedly Atwood is suggesting that man inevitably, despite of himself, creates God, with or without outside assistance.

It seems that throughout the novel there is an extended metaphor of Snowman as various figures from the Christian bible. The first figure that Snowman can be said to represent is that of Adam, the first man, though the similarities between the two characters do not follow the same chronology. Just as Adam is given the animals as companions to look over, similarly Crake has ensured that the Crakers and Jimmy are both left in the newly re-created world as companions.

Another strong resemblance and play on words can be observed in the Christian story of original sin and Crake's mass destruction of humanity...