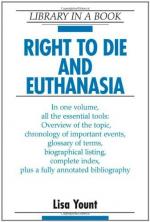 Get Research Paper on Euthanasia / Mercy Killing from Amazon.com
View the Study Pack

This student essay consists of approximately 4 pages of analysis of Research Paper on Euthanasia / Mercy Killing.

Summary: This tells about pros and cons of Euthanasia Mercy Killing.
Outline

I. The act of mercy killing is illegal yet many practice it regardless of its consequences because they want to help the terminally ill, the ill do not want to suffer anymore, and some just practice because they see nothing wrong with it.

A. The issue of mercy killing or euthanasia has been debated all over the world for many years.

B. People tried to have it legalized in Europe but the issue was overturned.

C. Some people would argue that there is no difference between mercy killing and taking a patient off of life support.

D. People might say that mercy killing is still murder.

II. Many people who practice euthanasia do it to help the terminally ill quit suffering.

A. Patients may ask doctors to kill them because they cannot do it themselves and they do not want to suffer anymore.

B. Some terminally ill...

More summaries and resources for teaching or studying Euthanasia.