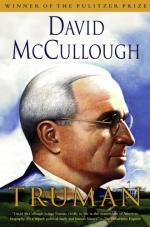 Summary: This essay is about how President Truman controlled the United States and what he has done as a positive and negetive effect.
Area being graded on: Grade Given: Effort Conduct

Reflection: President Truman has been graded in each area based on information that was learned about him and the way I interpreted what happened during his time in office. Truman received a B+ in Leadership, because he was always trying to be a leader and make things better. He lead the country into war, but his popularity fell. He caused the inflation and prices at one time went up 6%. He mobilized Americans created department of offence and prepared the country for war. He helped to change the way Americans looked at the country and themselves. He did have some downfalls, but mainly good things. In Domestic policy I gave him a B, this is because there was danger welfare of the nation, issued declaration of cold war, and he...

More summaries and resources for teaching or studying Truman.