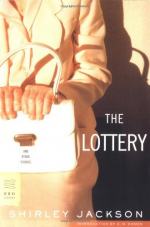 Get Traditions in "The Lottery" from Amazon.com
View the Study Pack
View the Lesson Plans
Related Topics
Shirley Jackson
The Haunting of Hill House
We Have Always Lived in the Castle
The Possibility of Evil

Shirley Jackson
This student essay consists of approximately 3 pages of analysis of Traditions in "The Lottery".

Traditions in "The Lottery"

Summary: Essay discusses how the novel "The Lottery" by Shirley Jackson, revolves around a series of traditions that no one seems to follow anymore.
Thesis: After a long period of time passes people forget the true meaning of their traditions by slowly disregarding as the years pass.

I. The first part of the traditional ritual that is changed is the chips of wood.

A. "Chips of wood, Mr. Summer's had argued, had been all very well when the village was tiny..."

B. It's perceived as though there is no regard to how the ancestors of this village put on the lottery.

II. The second part of the traditional ritual that is changed is the recital.

A. It is said that it was ."..performed by the official of the lottery, a perfunctory, tuneless chant that had been rattled off duly each year..."

B. . It's almost as if they heard of the tradition, took the stoning someone to death part, and then created the rest of the ritual themselves.

III. The third tradition that...

Traditions in "The Lottery" from BookRags. (c)2021 BookRags, Inc. All rights reserved.