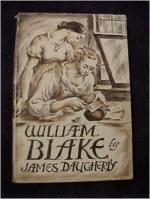 Get Analyzes the Two Initiative and Intellectual Approaches to Blake's Poetry from Amazon.com
View the Study Pack
Related Topics
The Tyger (Poem)

James Daugherty
This student essay consists of approximately 4 pages of analysis of Analyzes the Two Initiative and Intellectual Approaches to Blake's Poetry.

Analyzes the Two Initiative and Intellectual Approaches to Blake's Poetry

Summary: The different ideas one can get from reading Blake's poetry.
The early 19th century was a period of several revolutions, including the industrial revolution; this changed the way in which many people thought. Everything had become mechanised and the majority of Victorian society began to follow the voices of the upper class, the scientists and the politicians who believed that there was reason for everything and science explained all.

However there was a small group of radicals who did not blindly follow the powerful but who instead through art and poetry undermined this authority and expressed their own views. This group were called `Romantics' and included William Blake.

I believe that a comparison can be made between the intellectuals of modern society and the rationalists of Victorian society, as can the intuitive reader of today and the imaginative reader of that era.

Songs of Innocence and Experience can be read on several levels each of which appeals to...

More summaries and resources for teaching or studying William Blake.